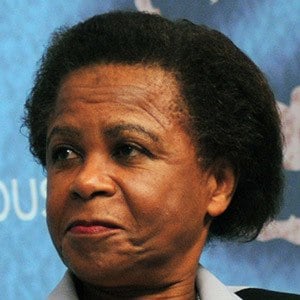 Accomplished politician, doctor and anti-apartheid activist who became known as the founder of the political party Agang South Africa. She has also worked as a Vice-Chancellor at the University of Cape Town.

She was once employed as the Managing Director at the World Bank.

Her mother Rangoato and father Pitsi were both teachers. She had two children with activist Steve Biko.

In 2004, she was ranked on a list of the Top 100 Great South Africans alongside FW de Klerk and Nelson Mandela.

Mamphela Ramphele Is A Member Of