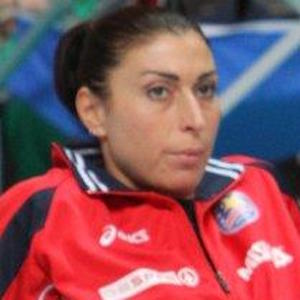 Italian volleyball player who won gold at the FIVB Volleyball Women's World Championship in 2002. She is the first Italian female volleyball player to represent her country in two Olympic Games, doing so in 2000 and 2004.

She began her career with the Serie D team Privett Volleyball in 1991. The following year, she made her professional debut with Gierre Volleyball Rome.

She won the award for Best Blocker at the 2004 FIVB World Grand Prix.

Her parents are Guido and Vincenza Leggeri.

She and Eleonora Lo Bianco were both standouts on Italy's national volleyball team.

Manuela Leggeri Is A Member Of