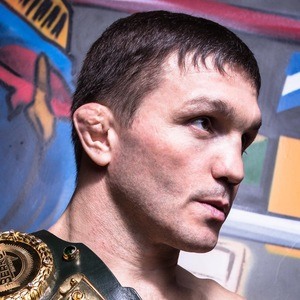 Mixed martial artist who captured the ACB Featherweight Championship in 2016. His story gained significant attention due to his having served 5 years in prison for robbery prior to his victory.

He was raised in the village of Karamet-Niyaz in Turkmenistan. He moved to Ossetia at age 18.

He was chosen to represent Turkmenistan at the Olympic Games in Barcelona but the dissolution of the Soviet Union shortly thereafter disallowed him from competing.

He lived with his aunt in Ossetia. He has an older brother.

He defeated Yusuf Raisov via unanimous decision in December 2016.

Marat Balaev Is A Member Of