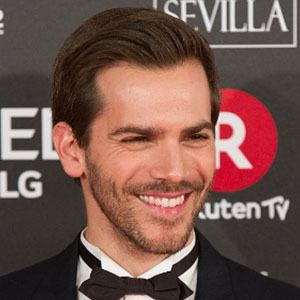 Spanish actor and model who is best recognized for his recurring roles in different Spanish soap operas. He is known for having plated Lago in the series El Cor DE La Ciutat and Vicente Vaquero on the series Fisica o Quimica.

He started his career as a model, posing for different magazines including Showdown in Spain. He then started his career in television in 1997 when he debuted on the series Tocao del ala. He then went on to land a recurring role as Pau Montaner in the 2008 series El Comisario.

He has won several awards for his acting performances including at the 2012 Turia Awards where he won Best New Actor for his role in the 2011 film La Voz Dormida.

He began a relationship with Natalia Sánchez and in early 2019, they welcomed their first daughter together named Lia. He was married to fellow actress Ana De Armas from 2011 to 2013.

He starred alongside Alejo Sauras in the 2017 feature film El Jugador de Ajedrez.

Marc Clotet Is A Member Of