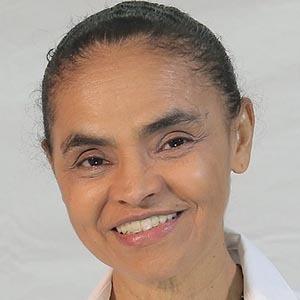 Brazilian politician and activist who is best recognized for her role in environmental works. She is known for being the spokesperson of the Sustainability Network, the Senator for Acre, the Minister of the Environment, and Councillor of Rio Branco.

Her career in politics started by leading demonstrations to warn against deforestation in 1984. She then was elected to the Federal Senate in 1994. In 2003, she started serving as Minister of the Environment.

She is known for having been one of eight flag bearers at the London Summer Olympic Games opening ceremony in 2012.

She was born and raised in the village of Breu Velho outside Rio Branco, Acre.

She was named one of Foreign Policy Magazine's top global thinkers in 2010 alongside Cecile Duflot and Elizabeth May.

Marina Silva Is A Member Of