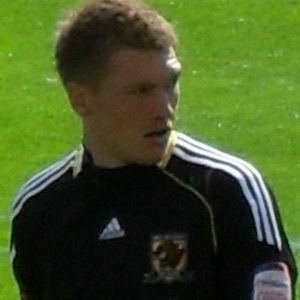 Professional goalkeeper known for his time with Oldham FC and Hibernian FC. He signed a two-year contract with Hibernian FC in 2015 after appearing in 35 games the year before while on loan to the club.

He played his youth soccer with Rotherham United. He signed with Hull City in 2008, but spent much of his time there on loan to other teams while struggling to get playing time.

He was on both the U18 and U20 English national teams growing up.

He grew up in Sheffield, but found some career stability with Hibernian in Scotland.

In 2014, became the first Hibernian goalkeeper to score a goal since Andy Goram had done it 26 years earlier.

Mark Oxley Is A Member Of