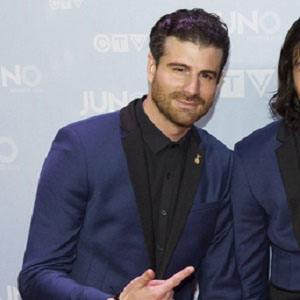 Vocalist and guitarist for the pop-reggae band MAGIC! who has also producer and written songs for notable artists such as Shakira, Trey Songz and Chris Brown.

Picking up piano at age six and the guitar at thirteen, he began producing and engineering albums when he was sixteen years old. He attended York University where he studied classical piano before transferring to the University of Toronto to study jazz guitar.

He has won two Juno Awards in the categories of Single of the Year and Breakthrough Group of the Year in addition to a Socan Award.

He was born in Toronto, Canada and is of Italian descent.

He and Nasri Atweh founded MAGIC! together.

Mark Pellizzer Is A Member Of