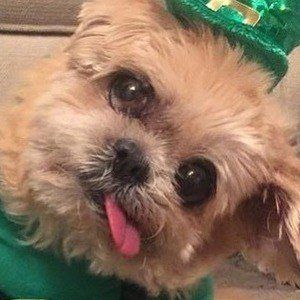 Shih Tzu who gained a significant following on the web, with over 1.8 million followers on Instagram. She also had over 800,000 followers on Vine before the app was discontinued. She was known for her head being permanently tilted to the side with her tongue out due to a vestibular disease.

She lived on the streets in Connecticut until she was taken by animal control to an animal shelter in August 2012.

On her Instagram account, she was featured in pictures alongside such celebrities as Neil Patrick Harris, Demi Moore and Bob Saget.

Her owner was Shirley Braha, who wrote a book about Marnie entitled Marnie the Dog: I'm a Book. Shirley named her after musician Marnie Stern.

She was a finalist for Best Animal in Social Media at the 2016 Shorty Awards but the award was eventually given to JiffPom.

Marnie The Dog Is A Member Of