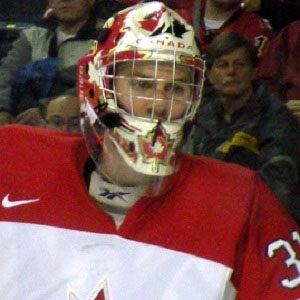 Canadian goaltender who was a member of the Los Angeles Kings team which won the 2013-14 Stanley Cup. He then helped lead the San Jose Sharks to the 2016 Stanley Cup Finals as the team's starter.

He played minor hockey with the Vancouver Northwest Giants of the BC Hockey Major Midget League.

In 2010, he was named the WHL Playoff MVP and received the Del Wilson Trophy as the WHL's best goaltender.

His father Harvey has served as the Vice President of Arena Operations with the Vancouver Canucks.

He was the backup to goaltender Jonathan Quick at the 2013-14 Stanley Cup Final.

Martin Jones Is A Member Of