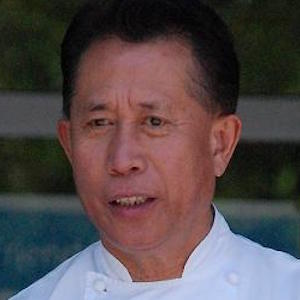 Both a chef and food writer who began hosting the acclaimed PBS cooking show Yan Can Cook in 1982. He received an honorary Doctorate of Culinary Arts by Johnson & Wales University and has won a Daytime Emmy Award as well as two James Beard Awards for Best TV Food Journalism and Best TV Cooking Show.

He first started cooking when he was 12 years old. He worked at his uncle's Chinese restaurant while attending Munsang College before receiving a diploma from the Overseas Institute of Cookery of Hong Kong, and later a Master of Science degree in food science from University of California, Davis.

He has been a guest judge on the shows Iron Chef Vietnam, Top Chef, Hell's Kitchen and Iron Chef America. He has written over a dozen cookbooks.

He is a Chinese-born Hong Kong-American man with a wife named Susan, and sons named Colin and Devin. His mother was a restaurateur and his mother was a grocer.

He is a celebrity chef on television like Gordon Ramsay.

Martin Yan Is A Member Of