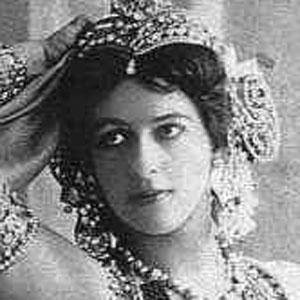 Exotic dancer from the Netherlands who was executed as a World War I spy. An exemplar of the femme fatale character, she inspired numerous novels and films.

She and her three siblings were born to wealthy Frisian parents in Leeuwarden, Netherlands.

After her death, her head was embalmed and kept in the Museum of Anatomy in Paris. It was discovered missing in 2000.

She was married to Rudolf John MacLeod from 1895 to 1903. The two had met when she had responded to his newspaper personal advertisement.

Kurt Vonnegut dedicated his book Mother Night to her.

Mata Hari Is A Member Of