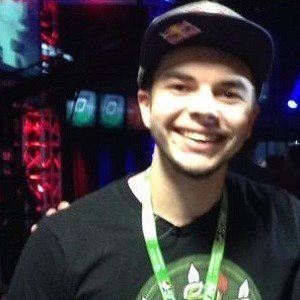 YouTube phenomenon named Matt Haag who makes a living as a competitive Call of Duty gamer. He is best known as Nadeshot or Optic Nadeshot. He earned the titles of MLG All Star Classic MVP and Champion and Gamebattles Live Champion and reigning Belt Holder for Call of Duty: Modern Warfare 2 among numerous others.

He first started competing at the age of 13 and turned pro when he was 16 when the first version of Modern Warfare became available in the Call of Duty franchise.

He joined OpTic Gaming LLC in June of 2010. His YouTube channel has over 3.2 million subscribers and he also has more than 1.6 million followers on Twitch.   He founded 100 Thieves in 2017.

He was born in Palos Hills, Illinois and his father's name is Jeffery. His mother died in 2012.

He plays Call of Duty for a living like fellow YouTuber Soargaming.

Nadeshot Is A Member Of