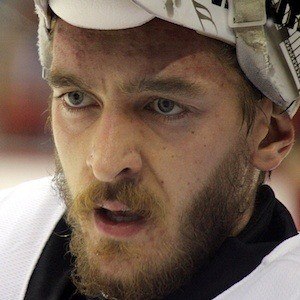 NHL goaltender who led the Pittsburgh Penguins to the 2015-2016 Stanley Cup title as a rookie. However, because he didn't play enough games during the 2015-2016 regular season, he was still considered a rookie in 2016-2017, leading him to break the rookie record for most Stanley Cup playoff wins on his way to a second Cup title.

He played major junior hockey with the Soo Greyhounds of the Ontario Hockey League. He was taken 83rd overall by the Penguins in the 2012 NHL Draft.

He dated Christina Sirignano in 2016. in June 2019, he married Christina Murray.  He was born to Jim Murray and Fenny Seinen.

Teammate Sidney Crosby was awarded the Conn Smythe Trophy after the 2016 playoffs.

Matt Murray Is A Member Of