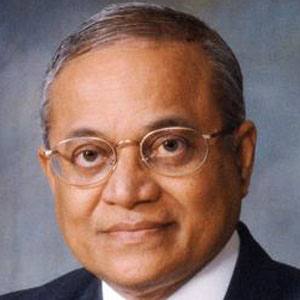 As a member of the Dhivehi Rayyithunge Party, this politician served for thirty years (1978 to 2008) as third President of the Maldives. After leaving office, he transferred his political allegiance to the Progressive Party of the Maldives.

Though born in Malé, Maldives, he grew up primarily in Egypt. He studied at both Al-Azhar University and the American University in Cairo.

During the 1970s, he was imprisoned for vocally opposing the policies of then-Maldives-President Ibrahim Nasir.

His marriage to Nasreena Ibrahim resulted in four children, including a politician daughter named Dunya. His father, Abdul Gayoom Ibrahim, had eight wives and over twenty children.

Gayoom was the third President of the Maldives; Mohammed Hassan was the fifth.

Maumoon Abdul Gayoom Is A Member Of