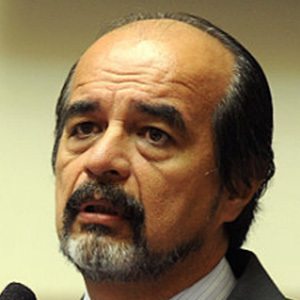 Politician who began serving in the Congress of the Republic of Peru in 2001, representing Lima for the APRA-PPC alliance. He also served as the editor of the left-leaning newspaper La República and the chairman of the national broadcasting company IRTP..

He received his law degree from Catholic University in Lima, Peru in 1978.

He is known for his aggressive behavior in Congress, frequently coming to the defense of the President in confrontational fashion.

He served in the administration of the former President of Peru, Alan García.

Mauricio Mulder Is A Member Of