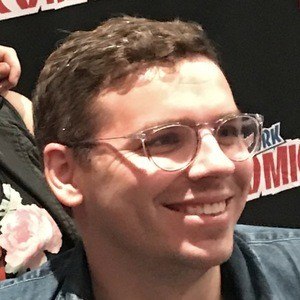 Children's author who rose to fame for his adventure novels Can YOU Survive the Zombie Apocalypse? and Galactic Hot Dogs. He has also gained widespread popularity for his The Last Kids on Earth series.

He earned his dual B.S. in film production and creative writing from Ithaca College in 2005.

He landed on the September 2016 New York Times' best-seller list for his 2016 novel The Last Kids on Earth and the Zombie Parade. He has also written for Adventure Time and Regular Show.

His father Jess is a publisher. He married Alyse Diamond in July of 2014.

His work has been praised by Diary of a Wimpy Kid author Jeff Kinney.

Max Brallier Is A Member Of