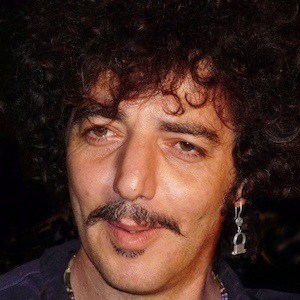 Italian singer and musician recognized for his high-pitched voice, he has released more than half a dozen successful solo albums since his music career began in 1996. He also makes up one third of the Italian musical group Fabi Silvestri Gazzè.

He began learning to play the piano at the age of six. Then, at fourteen, he turned his sights to playing the bass guitar, performing with a number of groups at clubs throughout Brussels.

Outside of his musical work, he has also starred in a number of Italian films like the 2010 comedy Basilicata Coast to Coast and the 2014 drama Misunderstood.

His father was a diplomat and, in 1982, moved with him to Belgium to work at the Italian embassy. He has often written music with his brother Francesco. He and his ex-wife Maria had three children: Samuele, Bianca, and Emily.

In 2007, he and racecar driver and amateur musician Jacques Villeneuve released the single "Foolin' Around" on the driver's album Private Paradise.

Max Gazzè Is A Member Of