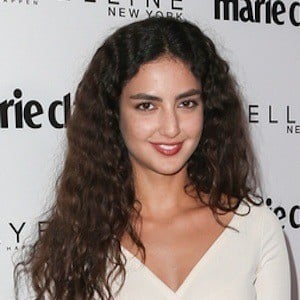 Cast member of the ABC series Still Star-Crossed in the role of Princess Isabella who has also been featured on the silver screen in films including Before I Fall and XOXO, among others.

She was modeling at the young age of 4 and took a number of dance and performing arts classes. She majored in theater and minored in English at UCLA where she performed on stage in productions of Medea and Georgie Peorgie.

She trained as a belly dancer for 3 years at Rouhi Dance Studio and in hip hop dance at Millennium Dance Studio for 2 years.

She is Iranian-American and also of Russian ancestry. Her mother Fariba Rahimi is a Jewish lawyer and her father Kiumars Rahimi is a Muslim dentist. She has an older brother named Farmon, and younger sister, Lila.

She was featured in a music video for the song "Heaven Can Wait" by Charlotte Gainsbourg, featuring Beck.

Medalion Rahimi Is A Member Of

UCLA
Before I Fall
XOXO
My Dead Ex