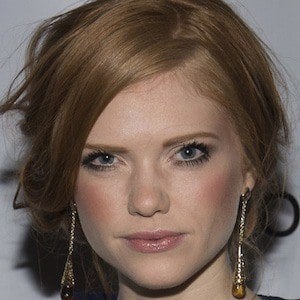 Most well recognized for her portrayal of the deceased Lila Stangard on the hit Shonda Rhimes series How to Get Away with Murder. She has also had notable guest roles on Public Morals, Constantine, and Law & Order: SVU.

She graduated from the University of North Carolina School of the Arts with a degree in acting.

Prior to her screen career, she worked extensively in theater, starring in productions of popular shows like Sweeney Todd, Cinderella, and Into the Woods.

She has two sisters named Madison and Jenna. Her two sisters are both blonde despite the fact that she is naturally a redhead.

She made her silver screen debut in the 2016 thriller The Eyes alongside Nicholas Turturro.

Megan West Is A Member Of