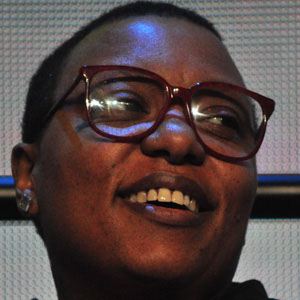 Ten time Grammy nominated American singer-songwriter credited with the inception of the 'Neo-soul' movement. In 1996, she had a no. 1 dance hit with a cover of the Bill Withers song 'Who Is He (and What Is He To You?)'

Growing up in Washington D.C., she attended Duke Ellington School of the Arts and Oxon Hill High School and changed her name at seventeen to Ndegeocello, Swahili for 'free like a bird.'

She played bass on the Madonna track "I'd Rather be Your Lover", and she also performed a rap in the song.

She was involved in a long-term relationship with author Rebecca Walker who was actively involved in raising her son, Solomon, who was born in 1989.

One of her biggest hits was a cover of Van Morrison's "Wild Night" which she sang with John Mellencamp.

Meshell Ndegeocello Is A Member Of