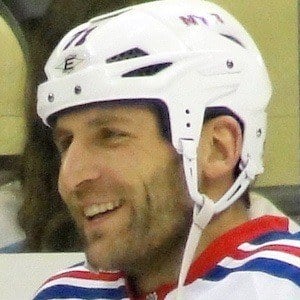 Retired NHL center who established himself as a grinding, physical forward during a 14-year NHL career. He scored 99 points while accumulated 855 penalty minutes over 610 games with six teams.

He was the ninth overall pick in 1998, but returned to play two more years in the OHL and went unsigned. He was then taken 76th overall by the New Jersey Devils.

He made his NHL debut with New Jersey in the 2002-2003 season. He scored his first NHL playoff goal during game seven of the 2003 Stanley Cup Final, a goal that ultimately proved to be the winning marker.

He has four children with his wife Christi and is a Born Again Christian.

Late in his career, he was suspended for four games after a check to the head of TJ Oshie.

Michael Rupp Is A Member Of