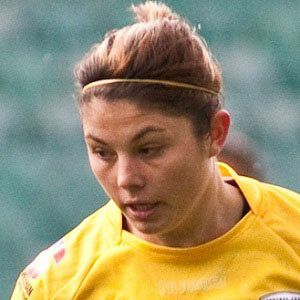 Australian striker who won W-League Premierships with Canberra United in 2012 and 2014. She began playing for Australia internationally in 2010 and has participated in tournaments like the 2014 AFC Women's Asian Cup and the 2015 FIFA Women's World Cup.

She was born in Shellharbour, Australia and began her professional career with Sydney FC in 2008.

She won three W-League Golden Boot awards from 2009 to 2012 and became the all-time leading scorer in league history.

She has been in a relationships with fellow soccer player Stephanie Ochs.

She was teammates with Caitlin Foord on the Australian team at the 2015 FIFA Women's World Cup.

Michelle Heyman Is A Member Of