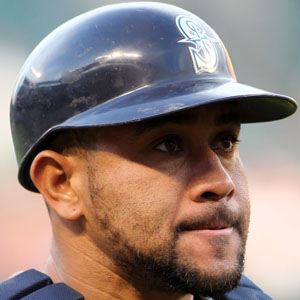 Dominican catcher who has played for major league teams like the Florida Marlins and Seattle Mariners. He signed with the Tijuana Toros of the Mexican League in 2014.

He was born in Villa Vasquez in the Dominican Republic and was signed as a free agent by the Oakland Athletics in 1996.

He was concussed after being hit in the back of the head by Albert Pujols' bat in October 2010.

He married a woman named Gloria.

He initiated a bench-clearing brawl between the New York Mets and his Marlins teammates by throwing a punch at shortstop Jose Reyes in 2007.

Miguel Olivo Is A Member Of