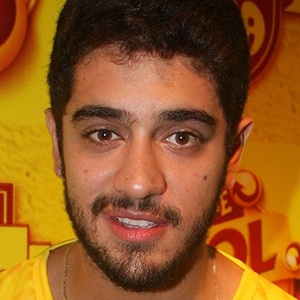 Actor and TV presenter who's famously known for playing the role of Shiva Lenin in the telenovela A Favorita. He also appeared in Orgulho e Paixão, A Grande Família, and Caras & Bocas.

He made his first TV appearance as André in the soap opera Coração de Estudante in 2002.

He won the 2008 Melhores do Ano award for Best Newcomer.

His parents are Malu Vita and Sergio Mauro. He has five siblings, Dennys, Giovana, Aline, Gisela, and Gabriela.

He appeared as Quincas in the TV series The Good Side of Life! starring Sergio Guizé and Debora Nascimento.

Miguel Romulo Is A Member Of