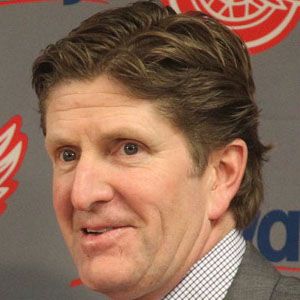 Legendary hockey coach who led the Detroit Red Wings to a Stanley Cup Championship in 2008 and became the franchise's all-time leader in career wins. In 2015, he was named head coach of the Toronto Maple Leafs.

He played hockey at McGill University, where he was named captain.

He became the first coach to win five national or international titles, including a gold medal coaching for Canada in the 2010 Winter Olympics.

He and his wife Maureen have 3 children.

He coached Henrik Zetterberg, Nicklas Lidstrom and Pavel Datsyuk to a Stanley Cup Championship with the Detroit Red Wings.

Mike Babcock Is A Member Of