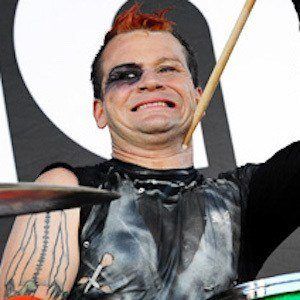 Drummer best known as one of the early members of the heavy metal band Coal Chamber. The band released three albums before it disbanded in 2003 and reformed again in 2011. After their reunion, Coal Chamber released the new album Rivals in 2015.

He and his brother Nathan competed for the spot of drummer in Coal Chamber in 1996 after former member Jon Tor departed.

Between stints with Coal Chamber, he formed other acts like Machine Gun Orchestra and We Are The Riot.

He beat out his older brother Nathan for his spot as drummer for Coal Chamber, but he later directed the video for their song "Loco." He and Stephanie Turnbo have a son named Bash.

He is joined in Coal Chamber by founder and lead vocalist Dez Fafara.

Mikey Cox Is A Member Of