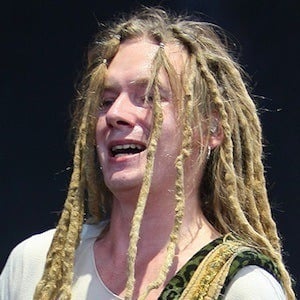 Guitarist and songwriter most famous for being a founding member of the Finnish goth rock band HIM, with whom he has recorded platinum-selling albums like Dark Light (2005). He began fronting the side project Daniel Lioneye in 2001.

He fell in love with music after hearing Elvis Presley in his father's car as a child. He began taking guitar lessons at age 10.

He has performed with the supergroup WhoCares, including hard rock and metal greats like Jason Newsted and Nicko McBrain.

He has a daughter named Olivia with his ex-wife, singer Mariam "Manna" Jäntti. He was later engaged to Toni-Marie Iommi, daughter of Black Sabbath guitarist Tony Iommi, before breaking up in 2013.

He welcomes singer Ville Valo to HIM in 1995.

Mikko Lindstrom Is A Member Of