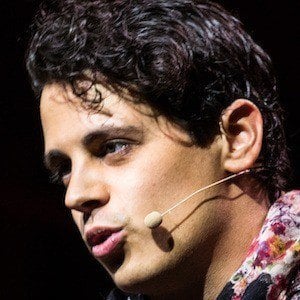 Controversial technology journalist known for founding the online tabloid The Kernel as well as for his work with Breitbart.com. He also provided early coverage of what would become known as Gamergate.

He attended the University of Manchester and Wolfson College, but never received a degree from either school. He then went on to work for the Daily Telegraph.

He's written under the name Milo Wagner. He was named one of Wired UK's top 100 most influential people in Britain's digital economy in 2011 and 2012. While he was running The Kernel, the publication was sued for failing to pay contributors.

He was born in Greece but grew up in England. He's openly gay, but has claimed to have done it by choice.

While on The Joe Rogan Experience, Rogan took Yiannopoulos to task for refusing to accept his own homosexuality.

Milo Yiannopoulos Is A Member Of