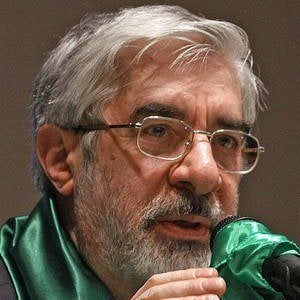 Affiliated with the Islamic Republican Party until 1987 and with the Green Path of Hope Party beginning in 2009, this Iranian politician held office during the 1980s as his country's Prime Minister. Earlier in his political career, he had served as Iranian Minister of Foreign Affairs.

After graduating from the National University of Tehran, he earned a graduate degree in architecture from the same institution.

He and his wife were placed under house arrest in 2011 for their support of political demonstrations throughout the Middle East.

He served as Prime Minister of Iran during the presidential administration of Ali Khamenei.

Mir-hossein Mousavi Is A Member Of