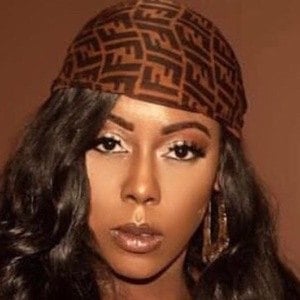 Reality personality on Love & Hip Hop who joined the series in season six. She is known for being one-half of the rap duo BBOD alongside Sexxy Lexxy.

She pursued a career in nursing at North Hampton Community College before revering back to music as her profession of choice. She did work at St. Luke Roosevelt's Hospital in Midtown Manhattan for a time.

She and Sexxy Lexxy became clients of Rashidah Ali.

She was born Monisha Brown in Harlem, New York, and would move to Pennsylvania as a teenager. She previously worked part time at her father's family owned business Dking Cars as a car salesperson.

She and Cardi B were both season six additions to Love & Hip Hop.

Miss Moe Money Is A Member Of