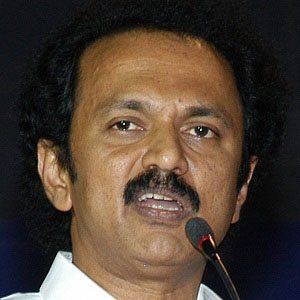 From 2009 until 2011, this Dravida Munnetra Kazhagam party politician served as Chief Minister of the Indian state of Tamil Nadu. Previously, he had held office as Mayor of Chennai and Minister for Municipal Administration and Rural Development.

He entered politics when he was just fourteen years old, running in a 1967 state election and becoming a political party committee member in 1973. He went on to earn a degree in history from the University of Madras.

He was named for the Soviet Communist leader Joseph Stalin, who died during the week of his birth.

His politician father, Karunanidhi, also held the office of Chief Minister of Tamil Nadu. Stalin and his wife, Durga, raised children named Udhayanidhi Stalin (who had a career as a movie producer and actor) and Senthamarai.

He and Jayalalithaa both served as Chief Ministers of Tamil Nadu.

MK Stalin Is A Member Of