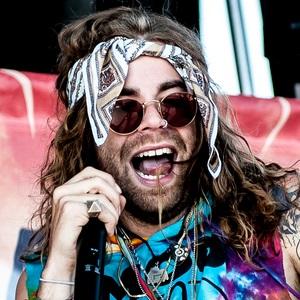 Minnesota-based rapper who gained popularity after the release of his first EP in 2010. His second studio album, Movie, was released in 2017.

His birth name is Derek Smith. He began his music career as a drummer for the heavy metal bands Four Letter Lie (based in Minnesota) and Scary Kids Scaring Kids (based in Arizona). He recorded his debut hip-hop mixtape, Let Ya Teeth Show, in 2009.

He coined the term "hippy hop" to describe his brand of hippie-influenced hip hop music.

His parents divorced when he was young, and he spent his childhood in both Long Beach, California, where his father lived, and Bloomington, Minnesota, where he was born and where his mother lived. He dated actress Bella Thorne from 2018 to 2019. He began a relationship with singer Avril Lavigne. The couple announced their engagement in April of 2022.

Mod Sun Is A Member Of