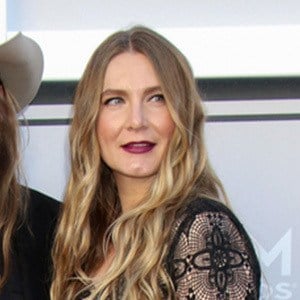 Background, harmony and duet vocalist who is part of her husband Chris Stapleton's band. She was instrumental in the creation of Chris' debut album Traveller.

She originated out of Nashville, Tennessee. Some of her first songwriting credits were for the Byron Hill songs "Bad For The Heart" and "Wings Of Your Love."

She has written song material that would be recorded by Carrie Underwood, Kellie Pickler and LeAnn Rimes.

Her birth name is Morgane Hayes. She and Chris welcomed twin boys named Macon and Samuel in 2018 after already having two other children.

She has performed as a background session vocalist on records for Dierks Bentley and Joe Nichols.

Morgane Stapleton Is A Member Of