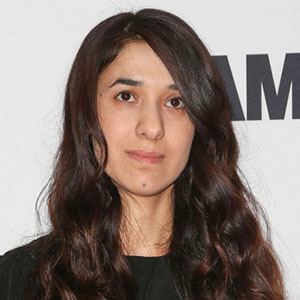 Iraqi human rights activist who is known for having been kidnapped by the Islamic State during 2014. She gained attention in 2018 when she won the Nobel Peace Prize for her efforts to end the use of sexual violence as a weapon of war and armed conflict.

After having been kidnapped and held as a slave in Mosul, she escaped after her captors had forgotten to lock the house. She made it to a refugee camp in Duhok before giving her first testimony to reporters in February of 2015. She then went on to found Nadia's Initiative, an organization dedicated to helping women and children.

She is known for being the first Iraqi and Yazidi to be awarded the Nobel prize.

She was born and raised in Kocho, Iraq to a family of farmers and Yazidi ethno-religious minority.

Nadia Murad Is A Member Of