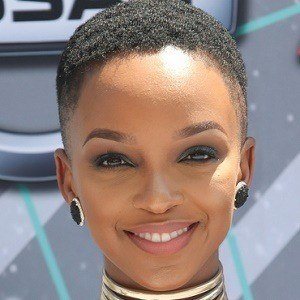 Musician and media personality who burst into the music industry with a debut self-titled album in 2012. She became a co-host of the Mzansi Magic magazine show All Access Mzansi in 2013.

She began performing when she was four years old as a lead ballerina in a ballet. She won numerous titles, including Miss Junior RSA. She later studied law at UKZN and Varsity College.

Her first television presenting job was as a host of the SABC2 pre-teen entertainment show Bling in 2004.

She was born in the province of KwaZulu-Natal in South Africa. Her father is a doctor and her mother a lawyer.

She was a finalist in the SABC1 presenter search for the music show LIVE, eventually losing to Minnie Dlamini.

Nandi Mngoma Is A Member Of