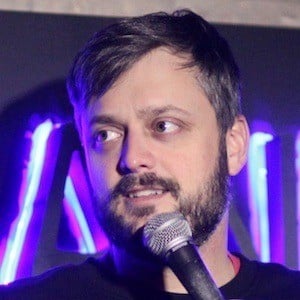 Comedian whose 2012 debut album Yelled at by a Clown peaked at #2 on the Billboard Top Ten Comedy chart. In 2017, he was featured as part of the original Netflix stand-up comedy showcase series The Comedians after having performed on The Tonight Show and Conan.

He moved to Chicago in 2001 to pursue stand-up comedy.

His second full-length stand-up comedy album Full Time Magic debuted at #1 on Billboard's Top Ten Comedy chart. He was named in Esquire Magazine by Jim Gaffigan as a top up-and-coming stand-up comedian in 2017.

His father worked as a full-time magician and clown, which inspired him to enter into show business as his own career.

He toured as a member of Jimmy Fallon's Clean Cut Comedy Tour in 2013.

Nate Bargatze Is A Member Of