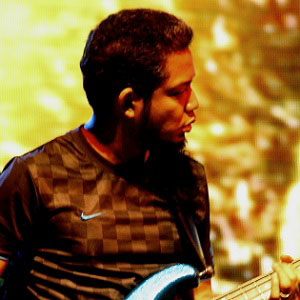 Filipino bassist, songwriter, and singer. He is known for his association with Hijo, Rivermaya, Bamboo, and other rock bands.

He began his musical career as a bass player for a punk cover band called Bazurak.

In 2003, he co-founded a band called Bamboo. Bamboo's first album, As the Music Plays, became a Double Platinum recording in the Philippines.

He married Ina Serrano in 2008. His brother, Nick Azarcon, had a successful career as a soul guitarist.

He and drummer Mark Escueta were both members of Rivermaya.

Nathan Azarcon Is A Member Of