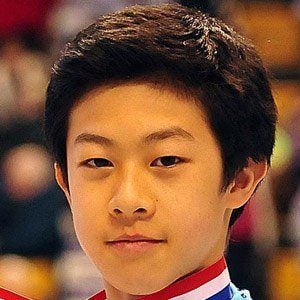 Chinese-American figure skater who became a three-time U.S. Junior Champion and won gold at the ISU Junior Grand Prix in Mexico in 2013. He became the 2017-18 Grand Prix Final champion. He later won a bronze medal in the team figure skating event at the 2018 Olympics.

He studied ballet and competitive gymnastics before deciding to focus on figure skating.

He had one of his best combined scores, 222.0, at the JGP Austria 2012 competition. He also became the first skater ever to land 5 quadruple jumps in one program. He has studied at Yale University.

His Chinese name is Chen Wei. He grew up with four older siblings.

He and Ilia Kulik were both Junior Champion skaters.

Nathan Chen Is A Member Of