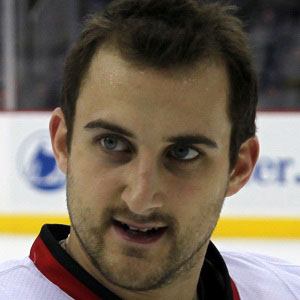 All-Star left winger who was drafted in the first round of the 2006 NHL Entry Draft by the Ottawa Senators and was traded to the Columbus Blue Jackets in 2012. He has represented the U.S. internationally at tournaments like the World Under-17 Hockey Challenge and the World Ice Hockey Championships.

He was born in Buffalo, New York and began playing with the United States National Development team in 2003.

Since his mother passed away form cancer, he has been a large public supporter of cancer research. He has also served as the Celebrity Chair of the Ottawa chapter of Cystic Fibrosis Canada.

His father Mike Foligno and brother Marcus Foligno have also played in the NHL. He married a woman named Janelle in 2011.

He has played alongside center Ryan Johansen in Columbus.

Nick Foligno Is A Member Of