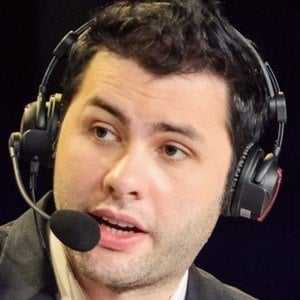 Known under the name Tasteless, he is recognized for providing commentary for mainly Starcraft and Starcraft 2 tournaments. He is also known for his work as the commentator for Afreeca TV's StarLeague Games where he reports on the Global StarCraft II League Championships.

He started winning StarCraft competitions while in high school and went on to attended Regis University in Denver where he majored in philosophy and psychology. After graduating, instead of grad school, he chose to pursue StarCraft full time.

He is known for having been recruited as a commentator by the broadcasting company GOM TV where he provided commentary for StarCraft II matches in Europe, Japan, and Singapore.

He is of American heritage but was born in Grenoble, France and later resided in Seoul, South Korea. He is the brother of fellow e-sports commentator Sean Plott.

Dan Stemkoski is a fellow American E-Sports commentator who was also living in Seoul, South Korea and helped report under the portmanteau moniker Tastosis.

Nick Plott Is A Member Of