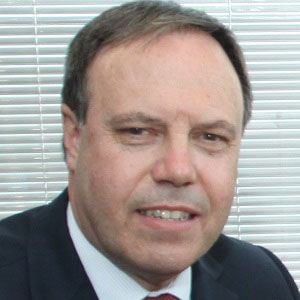 In 2001, this Democratic Unionist Party politician became a Member of Parliament for Belfast North. While in office, he also served as Northern Ireland's Minister of Finance and Personnel; Minister of Enterprise, Trade and Investment; and Minister for Social Development.

After earning an honors degree in law from St. John's College, Cambridge, and subsequently studying at Queen's University, Belfast's Institute of Professional Legal Studies, he worked for over a decade at the Secretariat of the European Parliament. During this period, he also served on the Belfast City Council and was eventually elected Lord Mayor of Belfast.

In 2003, the IRA targeted his office; however, the British military foiled the plot.

His politician wife, Diane Dodds, served as a Member of the European Parliament; the couple raised two children.

He and Ian Paisley both ascended to high-ranking positions within Northern Ireland's Democratic Unionist Party.

Nigel Dodds Is A Member Of