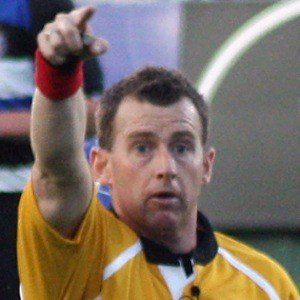 Rugby union referee and television personality who has officiated multiple Rugby World Cup tournaments. He has hosted the Welsh talk shows Jonathan and Bwrw'r Bar as well as the quiz show Munud i Fynd.

He was raised in the Welsh village of Mynyddcerrig. He worked as a farmhand and with the nonprofit organization Menter Cwm Gwendraeth.

He came out as gay in 2007 and was named Gay Sports Personality of the Year by Stonewall.

He has a godson named Efan.

He and Tim Mander have both worked as rugby referees.

Nigel Owens Is A Member Of