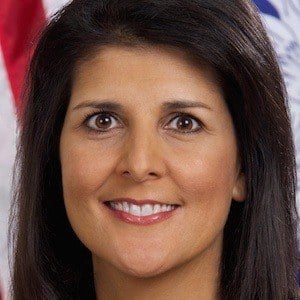 Republican politician who became the 116th Governor of South Carolina in 2011 after serving in the South Carolina House of Representatives for five years. In 2017, she became the 29th U.S. Ambassador of the United Nations.

She worked for FCR Corporation, a waste management and recycling company, after graduating from Clemson University with a B.S. in accounting.

She is the first woman to serve as governor of South Carolina. When she was elected, she became the youngest sitting governor as well and one of two sitting Indian American governors.

She raised children, Rena and Nalin, with Michael Haley, whom she married in 1996.

Nikki Haley Is A Member Of