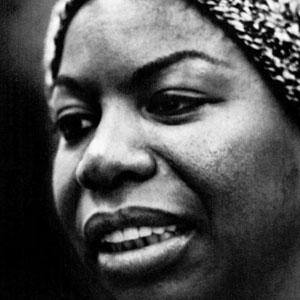 Singer, civil rights activist, pianist, and arranger who worked in many genres, including blues and jazz and who covered "Strange Fruit." She was nominated for fifteen Grammy Awards over the course of her career.

She refused to perform when her parents were ushered to the back of one of her concerts to make room for white people.

One of her first hits was her version of "I Loves You Porgy."

She married Don Ross in 1958 and, after their divorce in 1960, she remarried Andrew Stroud in 1961. She had a daughter named Lisa Celeste Stroud.

She took her last name from French actress Simone Signoret.

Nina Simone Is A Member Of