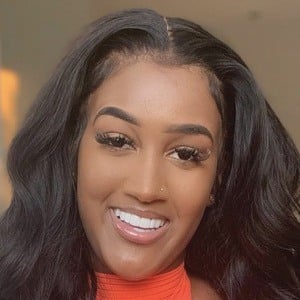 YouTube star who is widely known for her Nique & King channel. She has gained popularity there alongside her former long-time boyfriend King for their couples vlogging, including challenges and pranks. Her full name is Antoniqua Brown.

She initially met King while she was in ninth grade. She helped to co-create her YouTube channel in June 2017.

One of her most popular YouTube videos, "MOM IM PREGNANT PRANK!!!! MUST WATCH," has amassed more than 250,000 views.

She published her first vlog entry to her YouTube channel alongside her then-boyfriend King in late June 2017; the couple split up in 2020. They welcomed their first child, a son named Kaiser, together in September 2018. She has been romantically linked to Dwayne Bacon.

She was the object of a laxative prank perpetrated by King.

Nique Is A Member Of