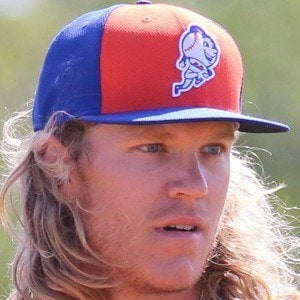 Pitcher who debuted with the New York Mets in 2015 and helped the team reach the World Series that same year. He played in the 2012 All-Star Futures Game.

He committed to Dallas Baptist University but elected to sign with the Toronto Blue Jays after high school instead.

His arm strength, combined with his last name, have earned him the nickname "Thor" from teammates.

His parents are Brad and Heidi Syndergaard. He has two half-siblings through his father.

He and Bryce Harper were both chosen in the first round of the 2010 MLB Draft.

Noah Syndergaard Is A Member Of