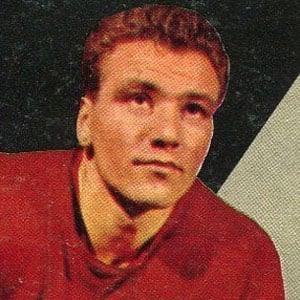 Hall of Fame NHL center who led the league in goals in 1965 with 42 for the Detroit Red Wings. He spent most of his career with the Wings and Toronto Maple Leafs and retired with 490 career goals.

He played with the Edmonton Flyers in the WHL, the minor league affiliate of the Detroit Red Wings, before starting his NHL career.

He played center on a line with fellow Hall of Famers Gordie Howe and Ted Lindsay during his second season on the Detroit Red Wings.

He grew up in the town of Provost, in Alberta, Canada.

He was sent to the Toronto Maple Leafs in the same trade that brought Frank Mahovlich to Detroit.

Norm Ullman Is A Member Of