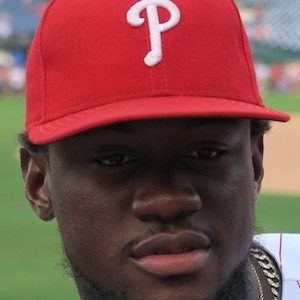 2016 All-Star selection of the Philadelphia Phillies who made his debut with the team in April of 2015 after having spent 2008 through 2014 in the Texas Rangers' farm system.

He was signed by the Rangers in 2008 as an international free agent.

He moved on from Texas to Philadelphia after being selected by the Phillies as part of the Rule 5 draft that discourages stockpiling of too many young players.

His father gave him the nickname of El Torito (Little Bull) when he was young.

He joined Peter Bourjos as an outfielder for the Phillies.

Odubel Herrera Is A Member Of