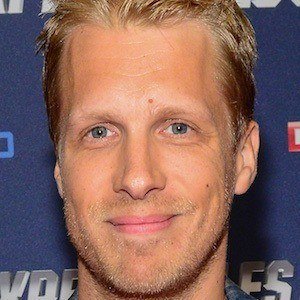 Comedian and television host most well known as the star of talk shows like Die Oliver Pocher Show, Schmidt & Pocher, and Rent a Pocher. He's also renowned for recording singles for the 2006 World Cup and the 2008 European Football Championship.

He was apprenticing with a life insurance company while he developed his entertainment career, performing in clubs as a DJ, getting part-time work at radio stations, and performing with the comedy group Holla-Bolla.

He is a singer as well as a comedian and has released a number of singles, including a collaboration with German rapper Bushido titled "Kennst du die Stars."

His parents, Gerhard and Jutta Pocher, were Jehovah's witnesses and he was also raised in the faith. He was married to Sandy Meyer-Wölden from 2010 to 2013. He has three children.

He starred alongside Jana and Sophia Munster in the 2010 children's film Hanni & Nanni.

Oliver Pocher Is A Member Of