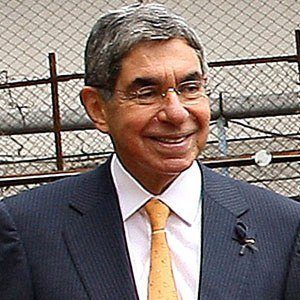 Political leader who held office as the President of Costa Rica from 1986 to 1990 and then again from 2006 to 2010. He received the Nobel Peace Prize in 1987 for his work on the Esquipulas II Accords, which sought to spread democracy and peace in the Central American isthmus.

He studied at the University of Essex and London School of Economics.

He got married to Margarita Gongora in 1973; the couple has two children, Oscar and Silvia.

He was awarded the Nobel Peace Prize in 1987, three years after Bishop Desmond Tutu .

Óscars Arias Is A Member Of